The International Day of Friendship was proclaimed in 2011 by the UN General Assembly with the idea that friendship between peoples, countries, cultures and individuals can inspire peace efforts and build bridges between communities! Friendship Day is a day in several countries for celebrating friendship. It was first proposed in 1958 in Paraguay as the "International Friendship Day". In India, Bangladesh, Malaysia and UAE, Friendship Day is celebrated on the first Sunday of August every year!

There are three DAV Engineering Colleges in India, one at Jalandhar in Punjab, one at Kanina in Haryana, and one at Daltonganj/Medininagar in Jharkhand, and I have worked as Director/Principal in the latter two of these Colleges from 2010 to 2011. After that I joined the Ghubaya College of Engineering & Technology (GCET) in Jalalabad (W), District Fazilka, Punjab where I worked in the same position as Director/Principal from 2011 to 2013.

Before that, I also worked as Director/Principal at the Indo-Global College of Engineering in Abhipur (Mohali), Chandigarh in 2009, and as Professor & Head of the Department of Physics at the Lovely Professional University (LPU) near Phagwara in Punjab, India in 2007 after my retirement as Professor, Department of Climate Change & Agricultural Meteorology, Punjab Agricultural University (PAU), Ludhiana, India on 31st March 2007.

I also worked abroad for several years in various institutions such as Consultant in NASA/USA, Academy of Athens in Greece, International Centre for Theoretical Physics (ICTP) under UNESCO at Trieste in Italy, Al-Fateh University at Tripoli in Libya, and as WMO/UN Expert in Harare, Zimbabwe on deputation from the World Meteorological Organization (WMO) of the United Nations (UN) in Geneva, Switzerland.

Having worked in Punjab State Government Service as Professor at the Punjab Agricultural University (PAU), Ludhiana and as Director/Principal in many Engineering Colleges and Private Universities in India till recently after our return from abroad, Central Government Service at SAC/ISRO, Ahmedabad till 1982, and International Government Service as WMO/UN Expert in the United Nations (UN) with diplomatic status & immunity besides NASA/USA and several other places all over the world including the world's hottest place, El-Zizia in Sahara deserts in Libya at 58 deg C and the world's coldest place Vostok in Antarctica at -89.3 deg C covering all the seven continents, what I discovered was that 'East or West, Home is the Best'!

An Anecdote on Suicide by a student at DAVCET, Kanina in Haryana:

Unfortunately, one student committed suicide by jumping in a pond in village Kanina located near Mahendragarh in Haryana when I was working as Director/Principal at the DAV College of Engineering & Technology (DAVCET), Kanina in 2011 after my transfer from the DAV Institute of Engineering & Technology (DAVIET) in Daltonganj/Medininagar in Jharkhand where also I was working as Director/Principal during 2010-2011 in the hostile Naxalite dominated surroundings! Some related links on DAVCET, Kanina in Haryana, India are also given below as reference.

I remained so busy the whole day on that day with police, taking out his body from the pond after three days of search, postmortem and cremation, etc., that I returned to the College very late around 3 am in the night and couldn't sleep thereafter!

At 9 am I called all the students for a condolence meeting and addressed them for about two hours as to why one should never commit suicide, no matter what happens in life! They listened to my long lecture in mixed Hindi & English very patiently and attentively, and took a firm pledge never to do it in their life!

After a few days there were semester exams and one of the students was reported to having similar suicidal tendencies when his paper was checked by the faculty. They said that he had not answered even a single question but he had instead reproduced all my words which I had spoken against suicide in my lecture in that condolence meeting !

They showed me his answer sheets wherein he had repeatedly written my advice to them with all details that 'Strong Will Power and Never-Say-Die Attitude Can Stop Suicides'! I then I told them that he will never ever think of committing suicide in his life, no matter what happens, and that they should not at all worry about him now! In the next semester he worked so hard that he passed his exam with good marks in all papers!

I wish I should have either recorded that condolence meeting lecture of mine, or taken that student's paper & answer sheets who didn't answer any of the questions asked in the exam but instead reproduced my complete lecture against suicide of that condolence meeting, as a reference for others to stop such extreme action of committing suicide by anyone!

My parents taught me in my childhood itself that what is important in life is not how hard one hits the target to achieve success but how hard one gets hit by the adverse circumstances and still able to stand up and move ahead! So, everyone should develop a strong will power and never-say-die attitude which can certainly stop suicides everywhere in the world!

This is what had kept me alive in the harshest and extremely cold and stormy conditions while wintering over the South Pole and circumnavigating and exploring the Antarctic continent during my active participation in the 17th Soviet Antarctic Expedition from 1971 to 1973 as the first ever Indian to do so and also becoming the first to do Ph.D. on it under the kind guidance of Prof. P. R. Pisharoty!

Wishing Everyone A Very Happy International Friendship Day on 30th July & first Sunday of August
Every Year with an additional message that Strong Will Power & Never-Say-Die Attitude Can Stop Suicides and Lead to All Success in Life!

Parmjit Singh Sehra - Down To Earth


'Set up inland stations' - Down To Earth

Dr. Parmjit Singh Sehra
(Former PAU Prof, ISRO, NASA/USA & UN Expert, and First Indian Antarctic & South Pole Explorer also the First to do Ph.D. on Antarctic and global environment & atmospheric studies, and the Founder of the Indian Antarctic Programme, having visited and worked in all the seven continents of the world from Deep Freeze, the coldest place Vostok in Antarctica at -89.3 deg C to Furnace, the hottest place El-Zizia in Libya, Sahara Deserts at 58 deg C, with name in history and details on the internet) 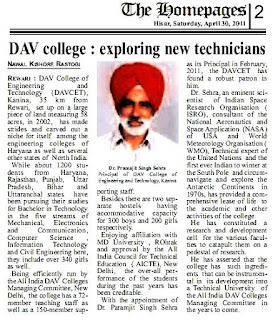